Heading into the Beaver Starbucks today? If you were planning to have a personal mug filled, you’re going to have to do it yourself.

The major coffee chain has stopped accepting personal cups behind the counter to prevent the potential spread of COVID-19, the novel coronavirus. You’re going to have to pour their coffee into your own cup and risk the splashing.

County residents are reflecting a nationwide wave of cleared product shelves, both recommended and conflated, and stocking up against the threat of an outbreak here.

Gov. Tom Wolf and the state secretary of health announced this morning two presumed positive coronavirus cases in Deleware and Wayne counties. The two people are under quarantine.

As of Thursday, 223 cases have been reported in 19 states in the U.S., including 12 deaths. Worldwide, there are 98,705 confirmed cases with 3,383 deaths, according to the coronavirus dashboard maintained by Johns Hopkins University.

County officials are looking at things such as who would be able to work from home, and those already scrubbing their hands raw in fear of the regular flu are scrubbing even harder.

“We’re putting in all these hand sanitizers (stations). The (Human Resource Department) put out an email explaining when you cough, to cover your face, and to wash your hands as much as possible,” county Commissioner Tony Amadio said.

“When I come in, I wipe my phone down because you just never know.”

While the U.S. Department of Health and Human Services states that there is no vaccine and immediate health risk to Americans is low, it recommends that people should wash their hands often with soap and water, cover their mouths and noses when they cough or sneeze, stay home when they’re sick and see their doctor if they think they’re ill.

“My hands are actually peeling because I’ve been washing my hands for the flu, not the coronavirus. It was to make sure I don’t get the flu. I’m a retired teacher, so I taught for 30 years and dealt with this my whole career, and the number one item is to wash your hands as much as possible,” Amadio said.

Local store managers have noticed an influx of customers at the Center Township Target store since last Friday, with consumers clearing out shelves of hand sanitizers, disinfectant cleaners, spray and wipes.

“We’re getting a lot of guests looking for the essentials. Hand sanitizers are a hot commodity of course, different soaps – anti-septic soaps – and, (in the pharmacy department) over-the-counter medications,” store director Austin Johnson said.

“We had a lot of guests coming in for pets as well, which was kind of a surprise.”

While Johnson’s store has been able to re-stock those items daily, other local retailers haven’t done as well in keeping up with demand.

“What I’ve heard is that we’ve probably been the most in-stocked (store) than other retailers in the area,” Johnson said.

The trend is reflected countywide, as reports indicate Dollar Tree shelves are emptied of similar items, face masks are scarce, and parents are scooping up hand sanitizers for high school bands heading to Disney World.

On a county level, Amadio said the board has been putting preliminary plans together and is working in conjunction with the state health department and the Beaver County Courts to deal with a possible outbreak.

“We’re just doing follow-up as of right now. We’re coordinating with (and) have a process we’re putting together at the jail. We have a process at the emergency management center and 911 center. So we’re trying to put all the procedures together, protocols together so we will be ready if something were to happen in Beaver County,” Amadio said.

“As commissioners, we only have so much influence,” Commissioner Jack Manning said. “Row offices and row officers obviously control what happens with their own personnel, but there are some collective things we oversee. You also have the courts, which are obviously a separate branch altogether, and the courts will dictate much of what we need to be able respond to.”

“We would have to coordinate with the courts to determine what their plans call for, and they do have plans for a skeleton or emergency crew, so that things would keep working. So, if they’re open, then what support systems that the county provides to the court would have to remain open,” he added.

“That would determine who’s in, who’s out, who could work from home and who is told to go home until the situation is over and people can come back to work. Those are the things we are working through.”

“A case just showed up in New Jersey, but so far, no cases in Pennsylvania.” Manning said, “So, we’re kind of crossing our fingers and hoping these preventative measures mitigate things a little bit, should something happen, we’ll be able to execute a plan.”

Amadio said the office has the law department involved and have all other major department heads trying to get the information disseminated out to the public.

An Important Message To Our Readers

BeaverCountian.com’s coverage of the novel coronavirus is being made freely available outside of our normal paywall. We believe the information we are providing is important to all members of our community and should not be limited to just those with financial means.

For those who are able to support our efforts, we would appreciate it if you considered subscribing to gain access to all of our award-winning local reporting. As always, thanks for being a reader of BeaverCountian.com! 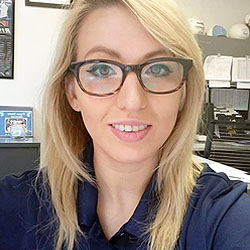 Matylda Zamudio
Matylda Zamudio is a BeaverCountian.com contributing reporter. She has degrees in media studies and digital communications from Eastern Florida State College and Pennsylvania State University.
Help Us Spread The News: